80 units were built by Boeing from 1962 to 1963. Boeing sub-contracted with GMC and Cessna. The unit has an airbag suspension and a hydraulically powered fifth wheel. The tractor could be lowered to engage the emplace and then raised to haul it. The first drive axle is live. The second can be engaged to drive and the third is a tag. Both front axles steer. The Alcoa aluminum rims are some of the earliest 5 holed aluminum ribbed budds known to exist. The top speed in 1st/low is 2.5 mph. The top speed in 5th/hi is 45 mph. The engine supplies both cold and hot water to the emplace to keep the missile climate controlled. Although the tractor had A/C... none of it was for the crew. It all was for the missile.

The unit top right is reported to have been built in 1962 and hauled Minuteman missiles until its retirement in 1994.

The photo on the bottom right is a scan of an actual 1961 press release photo showing the prototype pulling from the Boeing hangar in Wichita, KS. The prototype does not have the tag axle on the tractor or the lifting cylinders on the emplace.

This line drawing from an Ellsworth AFB drawing shows the internal setup of the rolling unit.

The following narrative is not mine and although the source doesn't wish to be contacted at this time, he hopes the following information will help open a dialog here of an important piece of GMC V12 and USA history. If you have any info, send it to mail@thunderv12.com and we would like to add it to the discussion.
The GMC V12 powered special purpose vehicle called the Minuteman Transporter Erector, or Minuteman TE for short. The vehicle was custom built by Boeing, GM, and Cessna Aircraft. They had to be able to roll out on public roadways with minimal special permits. They transported the complete Minuteman III missile (sans warhead) from the base out to the missile silo. At that point, the trailer (which was a monocoque fuselage built by Cessna) was coupled with pins to some big structural members next to the silo. Giant 5 section hydraulic actuators would then raise the body vertically, and a winch (with the ability to move on ball slides front/back and left/right) would lower the missile into the silo. I think the roll transfer weight of the payload (missile and carriages) was something like 80,000 lbs and the whole vehicle when loaded only weighed about 139,000 lbs. The tractor was hand-built by GM and powered by the V-12. The cab on the tractor was magnesium to save weight-----this thing was something else. Each site had several of these vehicles as missiles were moved in and out of silos regularly. 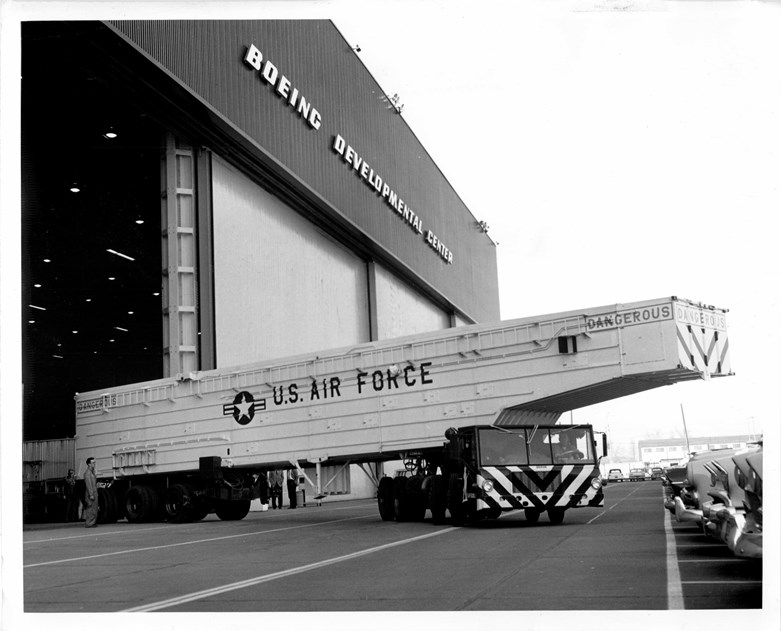 Everything for the unit was handmade. They needed to temperature control the trailer to protect the solid propellant missile, so they pulled heat off the engine for that. For cooling, they put a Pontiac A/C compressor on the engine and then took the normal A/C evaporator (that would be under the dash) and stuck it in a welded-up aluminum can. They then ran an anti-freeze/water solution through the can to cool the fluid. This temp-controlled fluid was then routed via a pumped loop setup to the trailer, where the hot or cold fluid was used to heat/cool the air in the trailer.

The Hill Aerospace Museum in Roy, Utah has a GMC V12 powered TEL in place for the world to see. Visit at
https://www.hill.af.mil/News/Ph

Warren AFB has a TEL sitting at their front gate in Wyoming.

Check it out at

A third TEL sits at Maelstrom AFB in Montana as seen here http://www.greinke.com/photos/1998_09_05%20Malmstrom%20trouble/Malmstrom%20AFB%20display/slides/transporter.htm

A history of the TEL at Ellsworth AFB in Piedmont, SD in the early '60s is here. Some great old photos as well.
http://www.siloworld.net/MINUTEMAN/ellsworth3__afb.htm

Video of the TEL in action is on YouTube. Go about 14 minutes into the video.
http://www.youtube.com/watch?v=WmSUoVJ1im0